SBKK Ramlila Runs in its 63rd Year Despite the Pandemic! 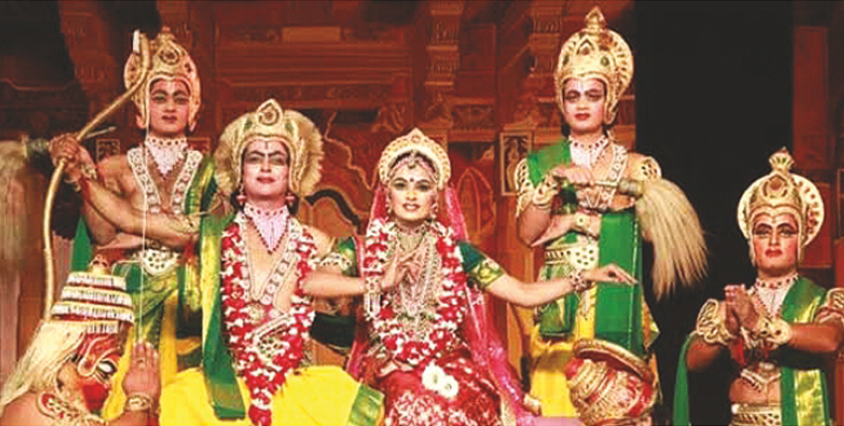 The Ramayana is not just a story.It has a philosophical and spiritual significance and a deep thought behind it.If we look at the Sanskrit root if the word 'Rama', the word 'Ra' means light and 'Ma' means within me. So, Rama means the enlightened one.Rama was born to Dasharath meaning 'Ten Chariot' and 'Kousalya' meaning 'Skills'.Thus, only a skillful rider of the ten chariots could give birth to 'Ram'.

Goswami Tulsidas wrote his epic poem 'Ramcharitmanas' in Awadhi in early 16th century making the saga of 'Ramayana' accessible to the masses in their language, which eventually led to a tradition of 'Ramlila' as the dramatic enactment of the poem.Shobha Deepak Singh Director of the oldest Ramlila in India, the dance drama Ballet 'Ram' talks about her creative journey and how she kept the show going despite the Covid 19 pandemic in a candid conversation with Priyaankaa Mathur.

Cultural impresario, an ardent photographer and the Director of Shriram Bharatiya Kala Kendra, Shobha Deepak Singh's creative genius and grit are simply unmatched. Being the student of art, Shobhaji had a penchant to explore creativity at its best from her college days. Be it making exotic Bandini's or Batiks at home on one hand to painting and sculpting on the other. Over the years her creativity transformed from her design board to designing on the stage, to process an epic like Ramayana and present it in a format relevant to the contemporary times!

Born to the renowned art doyenne Sumitra Charat Ramji, Shobha Deepak Singh gives insights on the inception of 'Ram' and how the legacy continues despite the pandemic, "My mother was a student of the Benaras Hindu University, where she got inspired by the Ramayana being staged every year. After she got married to my father and came to Delhi, she decided to do a 'Sampurna Ramayana' in 1957 which was seen by Jawaharlal Nehru the first Prime Minister of India.Over the years many Prime Ministers and Presidents have seen it and recognised Kendra's efforts to restore the tradition of India through its productions."

Scripted by the renowned writer Ramdhari Singh 'Dinkar' the 'Ramlila' was initially choreographed by Guru Gopinath which saw stellar performances by Kathak exponent Uma Sharma,Odissi exponent Aloka Paniker, Raghavan Nair and former Secretary of Sangeet Natak Academy Naresh Sharma and music by Biswajit Roy Choudhury and Jyotindra Moitra.On keeping up the tradition this year, she says,"Ramlila runs since 1957 till now without a break, so I decided we will continue the tradition this year too, because I staunchly believe in the saying 'Jo dar gaya wo mar gaya'. The only reason it could have been cancelled is if the government didn't allow us, but we received all the permissions and we are going by all precautionary mandates. In these times of the pandemic when everyone is in fear, those who watched the Ramayana live at SBKK were certainly enlightened."

Reminiscing her childhood being the part of a creative environment she says," I remember going to the basement of my house where I saw jewellery being made and many pieces of cloth of different colours, textures, silks, sarees, curtains, which were used to create exotic costumes.Once I was not well so my mother introduced me to the production to divert my attention from my illness, but I loved it all so much that it became an indispensable part of my life.My initial job was to maintain complete catalogues and eventually I got into designing the costumes, jewellery and the entire production. I loved to be on the backstage from an early age and I would try to fix the problems and difficulties the dancers faced."

Talking about creating a simplified narration which is more understandable she tells," I am an ardent reader and having read many contemporary interpretations of Ramayana and Mahabharata, I found that people have their perceptions about incidents as told in these scriptures. They don't understand what were the texts and sub-texts of the various themes since the language was Awadhi, which was difficult to understand. We translated Awadhi into Hindi to help people understand the events and their significance clearly to reaching out to a wider audience. For example for the golden deer, we made 'Hiran Sunahra Lalach Gehra', which is easy to comprehend that looking at the Golden Deer Sita felt the greed to have it."

Talking about incorporating different dance forms and classical music pieces in the act, she says, "Every seen has a different take on it and accordingly it has been choreographed. As the training of the four brothers is in 'Kalaripayattu' a dance form from Kerala, while all the fight sequences are in 'Mayurbhanj Chau' from Odissa while the Panchavati has more elegance and softness of 'Kathak' with beautiful music based on 'Raga Shankara'."

Bringing novelty on stage has been her passion, so which are her favourite scenes in Ramayan to watch out for she tells," I love the 'Jatayu', the 'Ram Shapat' and 'Ravan's court scene' when 'Srupnakha' comes with her amputated nose. According to Tulsidas Ram Charita Manas Ravan said," If any man can do this to my sister, he must be the Lord himself, and now I will fight Ram and lighten the burden of this earth by him killing me and attain Moksha!"

The dance drama production 'Ram' has travelled globally appealing audiences worldwide with an amalgamation of traditional presentations interwoven with modern age stage setups. From digital backdrops, animated scenes from PowerPoint presentations to exquisite lighting and props to revolving wings, which all help depicting the facets of Ramayana which intermittently merge with the story creating exquisite visuals be it for 'Sita Swayambar', 'Panchavati' or 'Hanuman going to rescue Sita in Sri Lanka'. She adds," Like in the scene to depict the supernatural powers of Lord Hanuman he is shown to grow in size multifold visually, which signifies that if you are given a task, then you must grow big enough to fulfil the task."

The Dance Drama Ballet 'Ram' goes digital this year with an idea to reach out to a larger audiences spreading the message of Ramayana which signifies the win of Good over Evil!